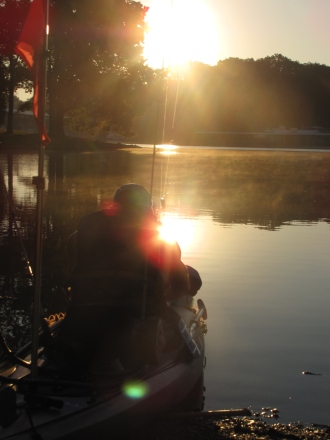 On the far side of a cove near Old Hickory Dam, the warm golden hue of a cloudless autumn sunrise silhouetted the ridge above Anchor High Marina in Hendersonville, Tennessee. With my paddle dug in and a resolute push, the flat-bottomed Dagger Cypress kayak slipped gently from the gravel shore.

To the starboard and port, a faint swirling mist rolled away from the bow as it nosed its way forward. To the aft, soft ripples drowned out a chorus of the waning summer’s birdsong. The boat felt solid, the load well balanced by the pilot and provisions for a few days of kayaking and camping on the shores of Old Hickory Lake.

Bearing the nickname of the former U.S. President Andrew Jackson, ‘Old Hickory’ was created in the mid-1950’s by damming the Cumberland River. The stretch between Hendersonville and Gallatin forms the border of Sumner, Davidson, and Wilson counties. The Lake extends some ninety-seven miles to Cordell Hull Dam in Carthage and incorporates twenty-two and a half thousand acres.

The serenity of Old Hickory Lake, a contrast to the well-rumored character of its namesake, is apparent along the carefully managed shoreline. Hidden coves, placid inlets, and the public access areas have a diverse population of wildlife.

Kingfishers chatter as they dart from their cover, too quick for the sharpest photographer. Herons and egrets hunt in the shallows where restless fish roll, and sometimes take flight just to slap back down again. Turtles pop up or bake in the sun and then slide from a half-sunken limb, while cormorants spread out their watery wings as they perch on uprooted trees.

Weathered, time-sculpted dead wood lies scattered and bedraggled; some beached on mud bars or islands that once formed the banks of the Cumberland River. The larger of these crooked and twisted wooden forms stir the imagination. They become ominous and foreboding creatures like gigantic spiders or gluttonous, man-eating dinosaurs. In reality, the Lake is quite safe, though, for the placid avocation of paddling.

Each year, The Lake hosts a number of national fishing tournaments; and the beautiful Sumner County weather entices a variety of motorized water sports. For example, The Wounded Warrior Project whose mission is; ‘To honor and empower wounded warriors,’ benefits from an armada of cocktail-sipping thrill-seekers who gas up their boats and then roar down the lake to the dam. And during another organized event; the ‘Old Hickory Fun Run’ the Lake resembles the Ganges as boats lash together for a mega-party, or a fat guy’s Kumbh Mela with beer.

Yet despite thundering power-boats, hi-speed Skidoos, and countless rubber ring-riding children in tow, the Lake is idyllic for much smaller boats, with the correct observation of safety rules.

Early on October 6th, 2016, I headed out toward the wide open water. The sight of the sheer expanse of the Lake could have stolen any paddler’s breath as it spreads almost three-quarters of a mile across from the Rockland Recreation Area to Old Hickory Park on the Davidson County side.

To the right and downstream was Old Hickory Dam. Sitting low in the water, the sprawling, sand-colored concrete wall caught the glow of the rising sun. The turbine generators within the dam produce enough electricity to supply 36,000 homes annually. The adjacent lock, a gateway to and from the Lower Cumberland River, allows through on average, some four and a half million tons of goods every year.

My thirteen-foot kayak, laden with gear, seemed minuscule in comparison. For a moment, I doubted my ambitious, twenty-mile goal of reaching Cage’s Bend before dark; and then on the next day for twenty more miles to camp at historic Bledsoe’s Creek. But to be an explorer was this Englishman’s childhood dream. Cook, Drake, Raleigh, and Chichester had catalyzed my passion for adventure. But that was a long time ago. As a father and a husband in his fifty-seventh year with the highest of expectations, I cussed for the first time that day. I wondered what the flip I was doing.

It was then, in that flash of uncertainty, and just inches from the boat that a small diving bird broke the surface, showing only its soft brown head. The bird clearly eyed the paddler before it quickly disappeared, making less of a splash than a raindrop.

The impression of that moment struck home. It suggested that there was more to the Lake than had met my eyes, and perhaps even more to this journey because as a resident of Sumner County for the best part of twenty years, I didn’t know that much about it. As was the truth in my life at that time, I didn’t really know where I was. However, on that day in October, I would learn more about myself and the place I called home in just twenty miles of paddling than I ever did from thousands of miles of trans-Atlantic travel, and jet-setting around the country.